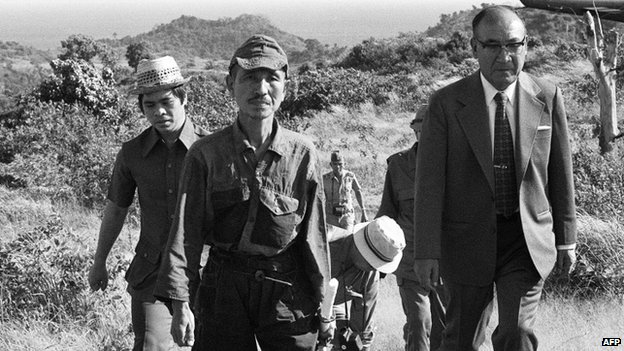 Onoda and his colleagues, however, had no idea the war was over. They continued on as soldiers hiding in the jungle. In time, two of the soldiers died and a third returned to civilization to surrender. Onoda lived by himself in the jungle for 29 years, until he was found in 1974 and persuaded to leave his post. An article from The New York Times explains:

“Caught in a time warp, Mr. Onoda, a second lieutenant, was one of the war’s last holdouts: a soldier who believed that the emperor was a deity and the war a sacred mission; who survived on bananas and coconuts and sometimes killed villagers he assumed were enemies; who finally went home to the lotus land of paper and wood which turned out to be a futuristic world of skyscrapers, television, jet planes and pollution and atomic destruction.”

Hiroo Onoda was living out of an old story from February 1945, unaware that just seven months later, the story had taken a dramatic turn. Hiroo Onoda had lived out of the wrong story for 29 years. Ravi Zacharius stresses that “life needs a story for one to understand the details. Life needs to hold together at the center if we are to reach to distant horizons. But our culture owns neither a story nor holds at the center.”

Every one of us lives according to some sort of story. The narrative of that story is what we turn to for life to have meaning and purpose, to guide our decisions and to determine how we will live. It is the filter we use to make sense of what happens to us. As we can see in Onoda’s life, living out of the wrong story has detrimental consequences.

The Good News is that Gospel offers a rich and unchanging story to serve as the basis and filter of our lives. We are called to be ambassadors for this story, telling the world that because Jesus has conquered sin and death and hell, we can all come out of hiding and live in peace with God. This is the story everyone needs to hear.

Close search
Cart
Back To Top
Thank you

You will receive all latest updates right in your inbox.

Thanks for contacting us! We will get in touch with you shortly.